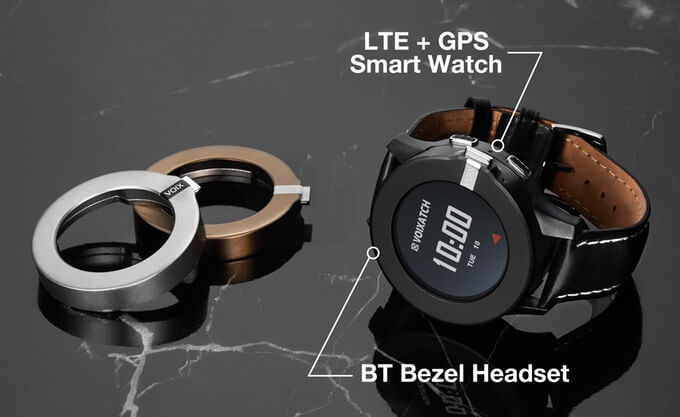 With the Voixatch, a new smartwatch was introduced, the removable bezel of which should act as a Bluetooth headset. A cellular connection is planned.

In the early days, smartwatches were almost completely dependent on a mobile phone, the devices have become self-sufficient in the course of time and are not only available with a WLAN module, but even with an integrated cellular modem. Telephone calls can be made both theoretically and practically, either using a headset or – rather cumbersome – speaking into the smartwatch.

Voixatch, which has already been financed successfully on Kickstarter, wants to bring the Bluetooth headset directly with it. Specifically, the bezel is the headset, which can be easily removed from the watch and can be connected via Bluetooth 5.0 not only to the smartwatch, but also to the smartphone – at the same time. According to the manufacturer, the smartwatch also charges the headset.

The smartwatch itself is based on an ARM processor, specifically four A53 cores with a clock frequency of up to 1.5 GHz are used. The processor can use two gigabytes of RAM, the internal memory measures 16 gigabytes. The AMOLED display has a resolution of 360 x 360 pixels and is 1.3 inches in size.

An Android-based system is used as the operating system, a heart rate sensor and a gyroscope are integrated, the same applies to LTE and GPS. A dedicated app is designed to make it particularly easy to use, protecting the IP67 against damaging environmental influences.

The Voixatch is scheduled for delivery in June. As part of the Kickstarter campaign, a model can currently be pre-ordered for 165 euros, whereby the usual risks for Kickstarter projects also apply to the smartwatch.