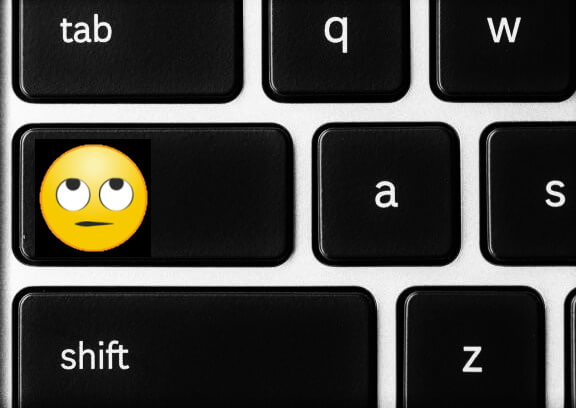 How often do you use the Caps Lock or Caps Lock key nowadays consciously and not unintentionally? Just! The prominent position could be used much more sensibly, argues a developer and brings about an emoji key as a potential replacement. What do you think about that? Should the Caps Lock key be replaced?

It time for the Caps Lock key to die. As early as 2019, developer Daniel Colin James advocated the abolition of this key, which is often useless today, but is prominently placed on our keyboards, which made sense on typewriters in the past when addresses were always capitalized.

The Austrian daily newspaper DerStandard recently took up the topic again and asked the question of whether it actually still makes sense in 2020 to waste the limited space on our keyboards for a function that is hardly used anymore. In digital communication, UPPER CASE is interpreted as TRENDINGLY AS SCREAMING – in contrast to the past, we also have more discreet and varied formatting methods to emphasize text visually.

Last but not least, many of us have probably been annoyed by the unintentional pressing of the button and the resulting need for correction, for password fields, a CapsLock warning is often even integrated. For the few who do not want to do without the function itself, the toggle function known from soft keyboards on smartphones would be conceivable: For example, press the shift key twice quickly.

In any case, the vacant space on our QWERTZ and QWERTY keyboards could be better used in the future, says Daniel. Chromebooks are pioneers in this regard and instead integrate Google search at the push of a button. A very practical replacement, especially for the millennial generation, would also be an emoji button directly in the keyboard. In any case, it’s time for the Caps Lock key to die, isn’t it?